How to Unblock a Toilet Drain in 6 Easy Steps

Unblocking a toilet does not always need professional help. Read on to find out how to unclog a toilet yourself and save a few bucks with our easy to follow guide.

No one likes dealing with a blocked toilet, which is why many choose to hire professions to get the job done.

However, knowing how to unclog a toilet yourself can cut down on its maintenance costs in the long run. While the first instinct may be to flush it until it gets unclogged, try to resist this urge. You may end up with an overflowing mess to deal with!

And to help you get the job done as quickly and effectively as possible, here are six steps you can take to unblock a toilet drain soon.

Let’s get right into it, shall we?

6 Steps To Unblock A Toilet Drain

Before any work can be done to unblock the pipes, the very first step is identifying the source of the problem, if possible. On some occasions, the source of the blockage is not too deep in the pipes and can be seen from the bowl.

In this case, get on your rubber gloves and pull them out. However, if you cannot see the source of the block, you may need to try alternative methods to get to its source.

One of the most common methods of unblocking a toilet is using a little dishwasher liquid and hot water. So, mix the two well in a bucket.

Once thoroughly mixed, pour the solution inside the bowl from a considerable height and let it sit for a minute or two. It should work its way deeper into the pipes after some time and provide lubrication to unblock the source of the congestion.

Of course, the classic method of unblocking a toilet is with a plunger. But don’t use any old plunger; it is important to use one with a flange at the base to create a complete sealed vacuum.

To effectively use the plunger, place it over the toilet bowl opening and insert it until it is fully submerged in the water. Press it down slowly and firmly and repeat until the water pressure is stabilised. Keep in mind that the plunger should properly seal the toilet hole to create the proper vacuum and pull the obstruction from the pipes.

Although it is an unconventional method, a coat hanger can be used to clear out the blockage in the toilet. Unravel a wire coat hanger, and you will be left with a long hook that can reach deeper into the toilet to remove the congestion effectively.

What makes this technique so effective is the reach on offer. When the blockage is located between 5 and 10 cm inside the drain, a coat hanger should effectively reach the block and free the flow.

If the source of the blocked toilet is more profound than the reach of the hanger, then a specialised tool called a drill or plumbing snake can be used. It is made of coiled wire and has a flexible design that can move along the complex shape of a toilet drain, making it practical to unblock any clogged pipes.

At the end of the wire, a spring-like shape can be used to push and pull the blocked material. The entire construction is made of durable metal, making it one of the most efficient methods to unblock a toilet when all else fails.

If you suspect that the source of the blockage is made of organic matter, then an effective method to remove it is using an enzyme-based chemical. These chemicals break down organic material to free the pipes.

They can usually be found in any hardware store, but if you need a quick fix, it is possible to make your DIY alternative at home: mix baking soda, vinegar, and hot water in a bucket to make it.

Once you have your solution ready, pour it into the bowl and allow it to work its way into the pipes. As the answer is quite strong, it should break down any solid matter in the pipes causing the blockage. Additionally, it should be noted that this solution is better suited for organic matter, and other objects or hair will not be affected by it.

Common Causes Of A Blocked Toilet

When dealing with a clogged toilet, it is good to identify what material is causing the blockage so you can employ the right method for freeing the pipes. Some common sources of blockage in a toilet include:

As is clear from this list, flushing large materials is not the best of ideas if you want to keep your toilet free from blockage. However, the cause of the blockage is not always due to human error.

Other factors such as tree roots growing in your piping system from the underground can cause such a problem. Air pressure is another factor that can lead to a blockage in your toilet, and such issues may require you to call professionals.

Unblocking Your Toilet Without A Professional

Now that you know a few alternatives to calling in a plumber, you are set to tackle any future toilet blockages.

A blocked toilet can bring daily life to a standstill if not dealt with in a timely manner. Working to resolve any clogs and buildup in your pipes is the best way to deal with this problem as and when it occurs.

If you find that none of these solutions is effective, it may be wise to employ professional help. And the source of the blockage does not always have to be congestion in the pipes; you may have issues in your plumbing system as well.

Of course, this should always be kept for the last resort, as the cause of your problems may be as simple as some clogged toilet paper at the opening of the pipe. Whatever the case may be, it is safe to say that you are more than ready for any obstacles that may pop up.

With that, we will conclude our guide. Take care until we meet again!

If you wonder what causes the frequent low water pressure situation at your home? We have listed some of the most common reasons behind it.

Are you thinking of DIY? Hiring a professional is the way to go if you have any blocked drains. Get in touch as soon as you observe any signs of blockage. 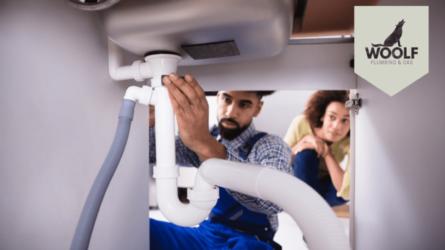 Why You Need to Have Your Drains Inspected

During a drain inspection, a plumber comes to your property and uses a state-of-the-art CCTV drain camera to examine the condition of your drains and sewers. Contact us today!

Made with ♥ in Australia by sitecentre.