Wondering which problems are the most prevalent in commercial bathrooms? We are here to help you with all the essential industry information you should know.

Are you sensing something wrong in the bathroom on your business premises but cannot identify the issue?

Firstly, know that you’re not the only one. The actual problem can be challenging for any business owner initially, as several issues might arise due to different faults in the plumbing system.

And often, you might not be able to recognise the signs of such problems easily. But then again, it’s essential to pinpoint what’s wrong in the bathroom to prevent significant problems in the long run. We’ve tried to make things easier for you by compiling this guide to the ten most common issues with commercial bathrooms.

The Most Common Commercial Bathroom Problems

A faucet that’s barely trickling or a toilet that’s hardly flushing indicates that the water pressure in the bathroom pipelines is low. Apart from these, there are other signs of this problem, such as failures in the boost pump and old or malfunctioning water fixtures.

But this problem might be the consequence of a more significant plumbing issue such as the breakage of a water line or the build-up of sediment in pipes. Hence, make sure you don’t ignore the problem even for a moment and take adequate steps to fix it efficiently.

There’s no denying that people tend to handle the sinks of commercial bathrooms carelessly, though those at home are used with care. As a result, dirt and other particles flow down the drains more often in any commercial establishment.

This issue can often cause the drain to be blocked either partially or entirely, naturally affecting your customers’ impression of your business.

Problems with toilets are widespread in bathrooms of commercial establishments. One issue is when the toilet leaks each time it’s flushed. Depending on the blockage in the toilet, the leak may appear as tiny drops or a significant outflow.

Note that such an issue requires immediate attention to prevent extensive damage. It might seem like a “small” problem, but if left unattended, it can lead to water wastage. This will lead to a hike in your water bills and may also clog the bathroom, especially when the septic tank is full.

A full septic tank will cause the water to overflow, giving rise to an unbearable smell and major structural problems in a commercial establishment.

At times, pipelines can leak behind walls continuously and silently, without people noticing it. This silent leakage will increase your water bills, so you need to contact a reliable plumbing service immediately if you notice any such inexplicable hike. They’ll be able to locate the leak and act on the root cause of the issue accordingly.

Silent leaks can also cause foul odours to linger in the surroundings, spreading to other rooms. And in case it’s the bathroom of a hotel or a restaurant, such an issue won’t go down well with the guests and will affect the reputation of the place in the long term.

The smell of sewage lingering in the air is quite discomforting. And in the case of a commercial establishment, it can cause your customers, clients, and employees to distaste such an environment.

Such a smell can be caused by many issues, including poor cleaning of the drains or clogs formed by the accumulation of dirt, hair, and oil. If such an issue occurs, try to detect the source of the smell and then call a plumbing service as soon as you can.

Thus, regular and thorough cleaning of the bathroom is necessary to prevent such possibilities in a commercial establishment. Ensure you monitor the cleaning at times to ensure it’s being carried out correctly.

The availability of hot water is another issue prevalent in commercial bathrooms. It is primarily caused by a burned component in the shower or a dysfunctional water heater or TMV.

In heavy amounts of sediment accumulating in the heating, tanks can bury the heating elements therein. This will obviously affect the heater’s efficiency and may even cause it to rust or get damaged entirely. Hence, the bathroom water heater needs to be cleaned regularly.

The lack of hot water can also arise due to leakages in the tank or pipelines, so you need to maintain those parts equally well.

7. Failed Internal Parts Of A Toilet

Commercial premises like bars and hotels experience an inrush of people regularly, often leading to malfunctioning toilets. However, this issue can be dealt with efficiently if you have a go-to plumber equipped with advanced plumbing tools to fix the problem quickly or conduct regular cleanups.

Remember that you should never try to fix such plumbing malfunctions, as a lack of experience can worsen the issue, making it more costly to fix. As mentioned earlier, the best way to avoid such problems is by maintaining the toilets regularly.

Entering a toilet and finding the flush handle broken is undoubtedly an embarrassing situation for commercial and residential premises. As such, it can lead people to judge your business poorly.

This issue can occur due to excessive force on the handle and is often caused when children fiddle with it. That said, some handles might even come with manufacturing defects. You can deal with such problems by replacing manual handles with motion sensors or buttons.

Another reason behind a marked increase in your water bills can be a leaking pipe or faucet in any part of the bathroom. For instance, the pipe beneath the sink may get damaged with regular use and start leaking.

It would be best if you repaired a leaking faucet quickly to minimise such water wastage. Also, leaky faucets may cause stagnant water to form in the bathroom, and if it isn’t drained, it can cause structural damage to the space in the long term.

Though this issue isn’t prevalent in commercial bathrooms, it may occur in the case of premises that experience a regular rush of people. Over the years, extensive use of any toilet may result in clogs in its drain.

Plungers or plumbing snakes can be helpful in such situations, but if the clog is much thicker and can’t be removed using these tools, you should call a professional. Again, the drainage system of the toilets should be subjected to regular checks to avoid permanent clogging of the bathrooms.

So, that was all about the various issues you might face with commercial bathrooms from time to time. We hope you’ll now be able to identify the problem in your business premises and take proper steps to get rid of it.

You’ll have to consult a good plumbing service to get the job done in most cases. That’s why you must discuss the issues you’re facing with the technicians in detail. Remember that you shouldn’t leave out the slightest inconsistency observed in the bathroom, as ignoring such signs might aggravate the problem.

It’s time for us to wrap up now. Do reach out to us if you need professional assistance with commercial plumbing in Perth. We’ll be more than happy to help you out.

Until next time, take care!

Wondering what are the most effective ways to stop annoying water hammer noises in your pipes? Don’t worry; our guide has all the answers to put your mind at ease. 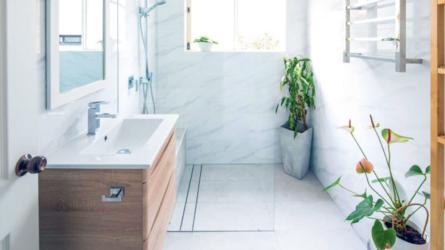 How To Plan A Bathroom Renovation

Are you planning to renovate your bathroom? Do not worry, as we have noted all that you need to know about the process in this bathroom renovation guide.

How To Fix A Leaking Toilet

Are you struggling to fix a leaking toilet at home? We provide you with all the help through this comprehensive guide on the topic.

Made with ♥ in Australia by sitecentre®.